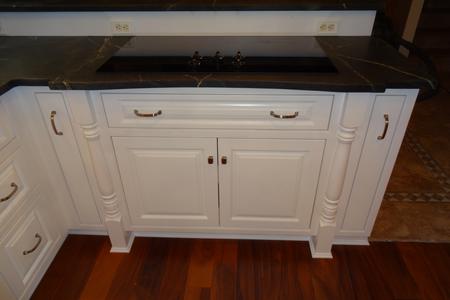 A straight on view of the detail required in string inlay work. Notice how I terraced the oven and glass door cabinets to compliment the ceiling angle. I must tell you that I bravely inquired of Peter if he was the fellow that picked all those pickled peppers and I was emphatically informed that he was NOT! 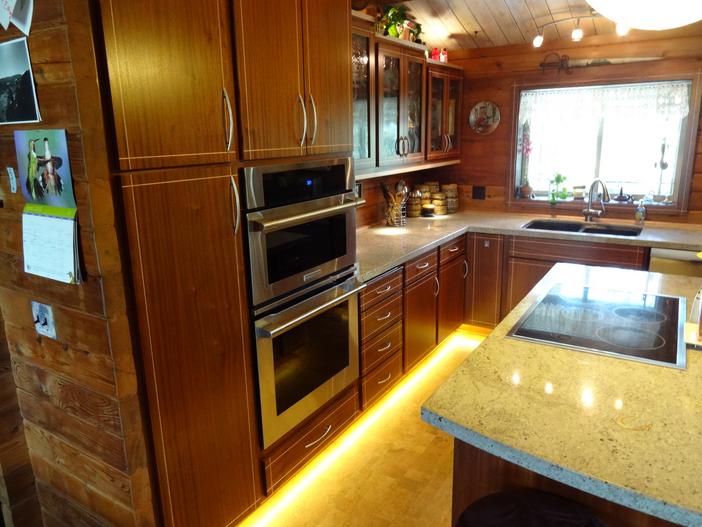 Can you imagine how the little girl felt on the morning of her 6th birthday when she saw what her mom had me build for her. It is sapele with eastern white maple string inlay. It is entirely made of sapele solid wood. No plywood in this piece.

That little dot in the center of these capture moldings is a sepele plug machined into the 4 way arrowpoint joint. Underneath the plug is a screw that captures all 4 molding ends and holds them tight to the base structure. In this way elastic memory will not be allowed to release the bond. 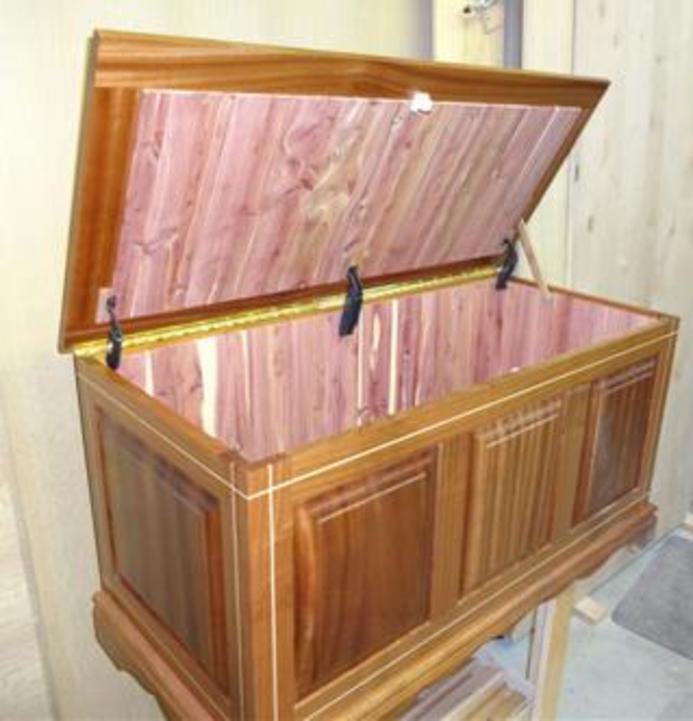 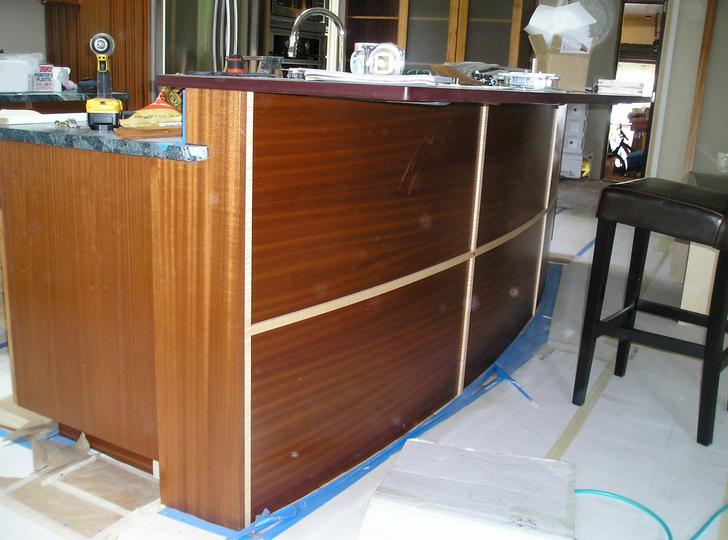 This curved island system was built for a client near the Spokane Country club. The Sapele face and ends were added to a curved core system I built from scratch. The curve is on a 45 foot diameter arch. The maple accent strips are actually precision moldings designed to capture the edges and ends of the sapele plywood sections and prevent elastic memory from causing them to release. 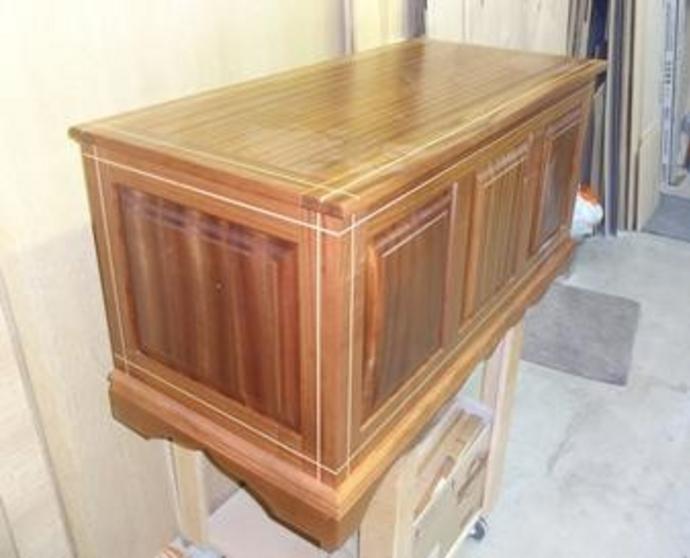 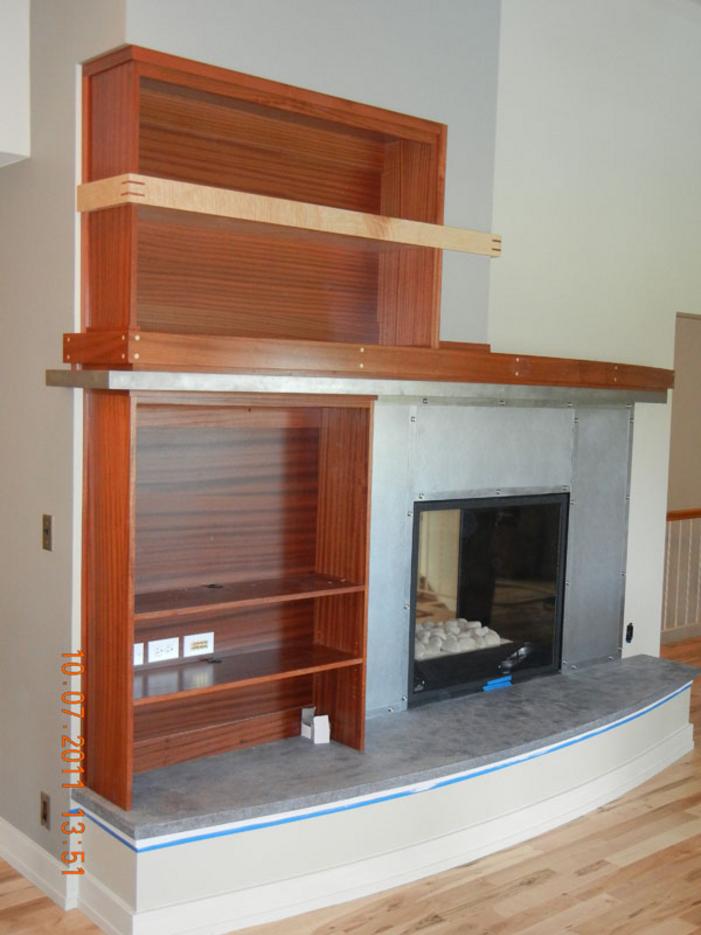 The beauty of sapele is really evident here. I built all of the cabinet doors with sapele stiles and rails and solid figured fiddleback maple panels that I custom made in my shop. This project was among the most detailed that I have ever done. It was only topped by the one that follows. 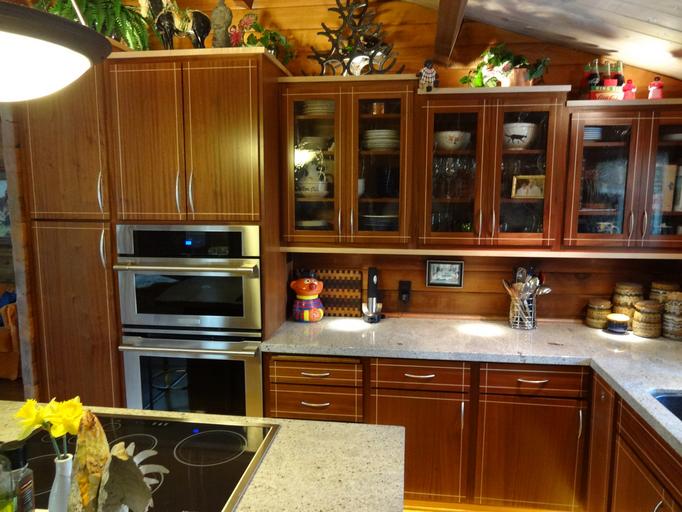 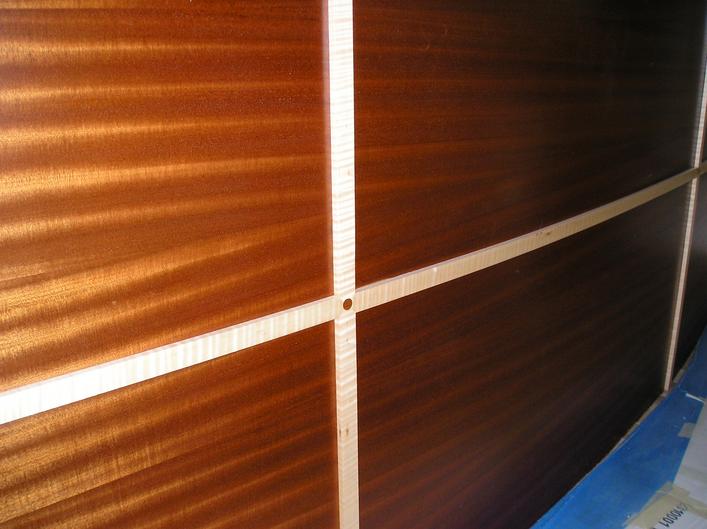 The entire interior is completely lined with solid aromatic cedar. There are 3 lid stays to keep the top up and on the right is a locking bar to prevent and accidental closure on little fingers. The little white device at the center edge of the lid is a magnetic lock. The panels on the front and ends are solid sapele raised panels. All of the scrollwork and other millwork was done in my shop from a pile of boards. 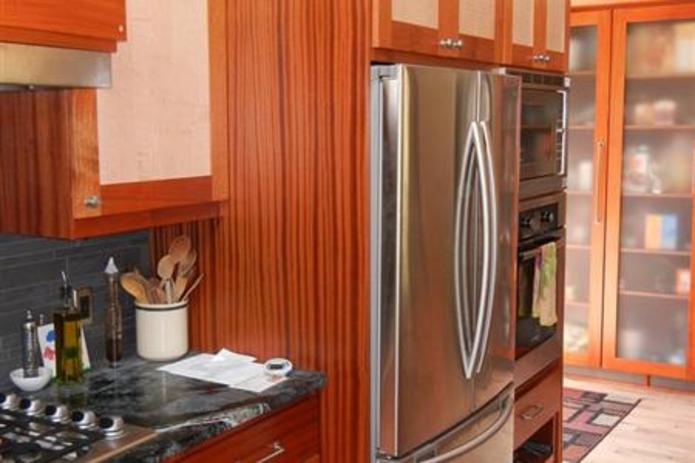 This entertainment center and mantel system was built for the same client as the kitchen shown in the previous photos. Robert Naudon, a professional designer and metalwork fabricator first built the arched metal piece you see in the center and delivered it to me. Using it as a pattern, I fashioned the arched sapele mantle cap above it. It was then fitted to the fireplace system and following that the top and bottom cabinets were designed, built and installed. Accents are in figured fiddleback maple.

I designed and built this kitchen for Peter and Patti Piper in Southwest Spokane. The basic material is sapele with highly figured maple string inlay. Absolute accuracy is required when building a project with this much detail as any misalignment would be easily detected. Patti's brother installed the toekick lighting. The floor is cork.